There are moments in the history of our world that caused all people to stop and take a reckoning of where we as a people have arrived and to where we believe ourselves to be going. When we all took a collective pause to watch the first footage beamed in from somewhere other than the earth and marveled as we watched Neil Armstrong take “one small step for man and one giant leap for mankind.” At that moment we knew that a new age was dawning and the wanderlust of our species would drive us to increasingly further reaches of the galaxy. So it was that in 2013 the Voyager I, a satellite containing art, music, photographs, and greetings in 55 languages left our solar system with the potential to take a theoretically endless trip around the galaxy. Greater still were the videos of the Berlin Wall, an edifice that had stood since the end of World War II, proclaiming a divided country and divided world, falling to the ground. Celebratory Germans stood atop the wall as a new dawn of unification of a nation and a the globe began to engulf all the people of Germany and by extension all those in the Western World who could not take our collective eyes off the moment, nor shake the feeling that a new dawn of hope and cooperation was happening to the world. Other images of course portended other moments, those moments when we held, and maybe continue to hold our collective breaths. A mushroom cloud signifying the end of a conflict and yet the dawning of a new age of violence and lethality of the weapons of war. Of tanks rolling into Tiananmen Square and the single person standing in front of the whole of the Chinese Army, displaying the deep inner strength and resolve that comes with simply being a human who has reached his breaking point. There are those moments in the history of the world in which we mark where we were when we either looked into the brilliant light of humankind’s potential for goodness and achievement or the darkness that lurks in the heart of men. Perhaps there are none as stark, as difficult, as symbolically powerful as the image of Jesus, his face neatly, almost perfectly, blown out of the stained glass of the 16th Street Baptist Church in Birmingham. 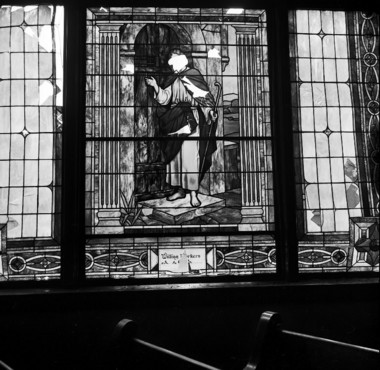 On September 15, 1963, in the midst of the white-hot era of the struggle for civil rights and racial equality that framed much of the history of our country in the 1950s and 60s, a group of Klansmen placed 15 sticks of dynamite under the front stoop of the 16th Street Baptist Church with a timer attached to make sure that it did as much damage as it possibly could. Set to go off at 10:25, an anonymous man called into the church at 10:22 where a 14 year-old girl named Carolyn Maull, the secretary of the Sunday Schools, answered the phone to hear only the words, “3 minutes” and then the click of the receiver ending the call. When the violent explosion ripped through the building, many were injured, but the only martyrs from that day would be 4 young African American girls. Three 14 year olds and one 11 year old. Their bodies so destroyed that they had to be identified by their clothes and jewelry. The front facade of the church was destroyed and the survivors had to pick through the rubble for hours after the explosion while at least one of the perpetrators stood alone and watched the horror that he had wrought. The mayor of Birmingham decried the attack and sent police in the quell the unrest. Governor Wallace called up the Alabama National Guard to spread through the city to tamp down any potential rioting, and President Johnson sent in the FBI to investigate the bombing. And the people mourned. The funerals were held a week later in a sister church. Dr. King presided over their internments. And a nation waited with bated breath to see what was going to happen next. And the face of Jesus was perfectly blown out of the window at the 16th Street Baptist Church, never to be seen again.
It was an era in our country to which none of us would wish return. A time in which the greatest sins of the nation continued to cycle on themselves until we sat on the precipice of coming apart at the seams and descending into a chaotic nightmare of violence begetting violence begetting violence. And perhaps it was the images of those four little girls being laid to rest that caused the nation to step back from the brink of implosion. Just as the image of Emmet Till caused the country to first pay attention to the struggle for equality many years prior. Perhaps it is these images to which we return in our minds that over and over again call forth those moments in which two roads diverge into a yellow wood and we chose to take the one less traveled by and that truly has made all the difference. It was less than a year after that congress passed and President Johnson signed the Civil Rights Act of 1964 that ended, legislatively, at least, racial discrimination and we were able to pause in the inexorable march towards greater justice and feel like we, as a people, had reached a higher plateau from which to move forward. We would never go back to that time again. Or so we thought.

One thought on “Opening Doors”